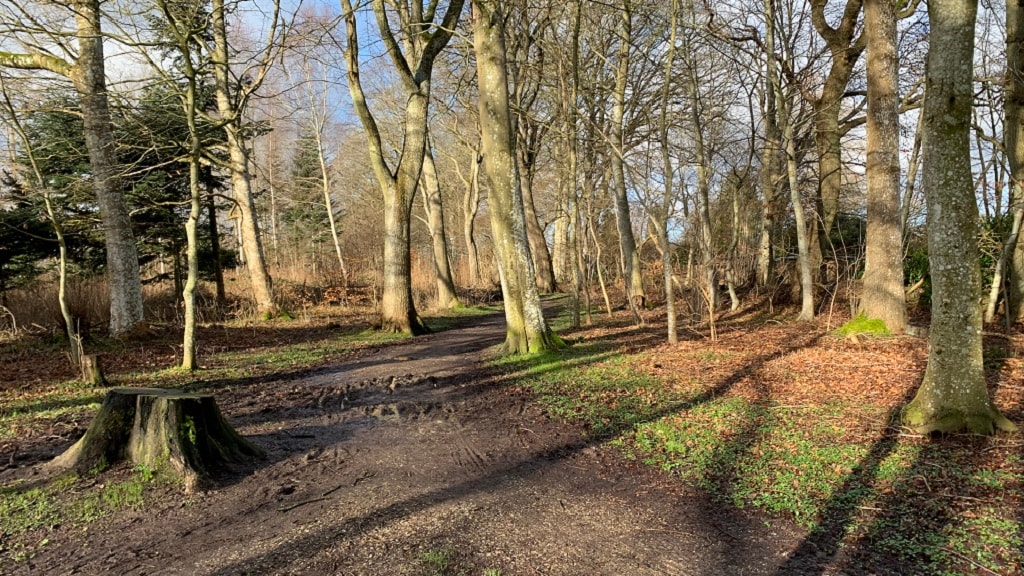 Welcome to the Count's Path

Rumour has it that the path got its name in 1754. At that time, count Adam Gottlob Moltke bought Dronninglund Castle, and a controversy was ignited between his manager Rosen and a serf about who should be responsible for the maintenance and cleaning of Smedebækken (brook).

Smedebækken is also known as the stream of the Nuns (Nonnernes Vandløb) because it supplies the fishponds around Dronninglund Castle (at that time Hundslund abbey) with water.

900 years ago, when the nuns were living at Hundslund Abbey, the monks rearranged the brook. They wanted the nuns to launder their clothes, and they rearranged the brook to that the nuns had water available inside the abbey. After the stream was rerouted, it went in front of the present Dronninglund Hovedgård, over the courtyard, past the drinking trough of the animals, and at last into the nun's scullery and kitchen. After that, the water ran down to the water mill os the castle, through the carp lake and ended down in Øster Møllesø.

The area surrounding Øster Møllesø is a beautiful natural area with great walking tracks. There used to lie a water mill from the 16th century by the lake, and a part of the old mill house is maintained.

On your tour around Øster Møllesø you can take a trip to the old Margrethe Oak. The tree is more than 700 years old. The old tree is located close to Dronninglund Castle.

Who was count Moltke?

Adam Gottlob Moltke was a German-Danish count and one of the richest and most powerful men of his time. When he bought Dronninglund Castle in 1754, he hired the well-known architect and landed proprietor Laurids de Thurah to manage the extensive renovation of the castle. Adam G. Moltke was also the man behind the beaufitul castle garden.

During his two marriages, count Moltke got no less than 22 children, which made the family Moltke great and influential in Denmark.

Hundslund Abbey, which Dronninglund Castle used to be called, is mentioned for the first time in 1260. Until the reformation in 1536, the castle functioned as a nunnery with nuns of the oldest abbey order, the Benedictines. The abbey was in all likelihood already an old and well-reputed institution back then.

The nunnery was one of Denmark's richest when Queen Margrethe the First gave it noble presents in the form of a deed of gift of 6. July 1393. Hundslund was now in possession of more than 100 farms in Vendsyssel.

After the reformation, the abbey was put under the crown, managed by vassals, among others two of the family Corfitz Ulfeldt and Peter Munk.

In 1581, the abbey ended its time as the possession of the crown and was overtaken by the squire Hans Johansen Lindenow. He built a new castle yard with the two corner towers, which still stands today. He also built the farm, which at the time was one of Jutland's greatest breeding farms.

From 1690 till 1729, that castle, church and farm was again in possession of the crown. Christian V's queen, Charlotte Amalie overtook the castle and renamed it its present name, Dronninglund. After the queen died, her son Frederik IV overtook Dronninglund, but he handed the castle over the year after to his sister, princess Sophie Hedevig. In 1719, she signed a deed of foundation for the establishment of seven princess schools in the Dronninglund area. She also had the church renovated, and she was very influential for the whole parish of Dronninglund.

Today, Dronninglund Castle is private owned and offers modern facilities as a castle commune / shared living space and office rental, which adds new value by using the old buildings with respect for the historical setting.